Duplexes remain a popular choice with real estate investors in Eugene Springfield, Lane County, Oregon.  Most duplexes in Lane County, but certainly not all, are located in the greater Eugene Springfield area.  I’ve found there’s a little more demand for city area duplexes than those in the country.  At the time of this posting, there is a lot of buying pressure on Eugene Springfield duplexes and not an abundance of inventory.  Of course, all markets equilibrate over time, and the duplex market will too.  High demand and low supply tends to push up prices.

There is no shortage of sages and money gurus who have something to say about real estate.  In fact, you could probably spend a lot of money on seminars that tell you how things supposedly work; unfortunately, in the real world of real estate and real estate investing most of the seminar ideas I’ve heard don’t work very well.  What does work well in the real world is to buy quality properties, manage them adequately, and hold the investment for a number of years.  When real estate investing is done correctly, the passage of time will make you look like a genius. 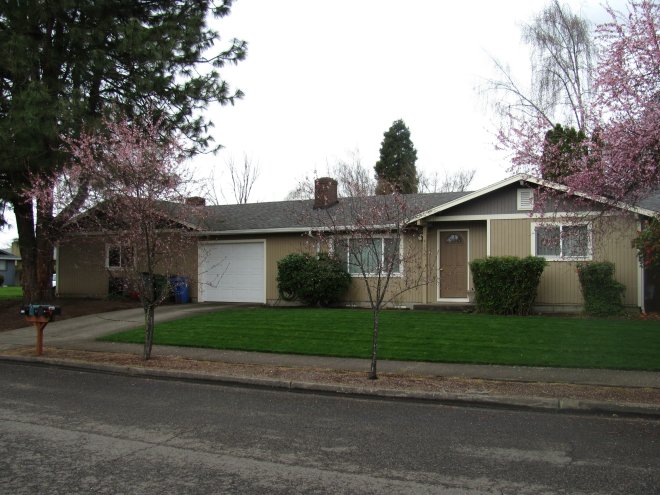 Duplex that I listed in sold. Near full price and in about a month.

What are advantages to a duplex, and why do folks like them for real estate investments in Lane County?  The following are some of the reasons.

Price:  They are relatively cheap as a real estate investment, so more people can afford them, so the market and demand is larger for a less expensive investment; high demand and a large market are what you want.

Owner occupied:  Some owners will want to live in one side of the duplex and rent out the other side.  The tenant in effect helps pay your mortgage, which is a nice benefit.  Duplexes are also popular in extended family situations, where someone wants to be close, but not too close.  Duplexes are one of the few real estate investments that allow for both an owner occupant as well as tenants.

Financing:  One to four unit complexes are usually easier and cheaper to finance than multi unit complexes, greater than 4 units.  And, owner occupied financing is especially cheap.  A portion of the rent, say 75% to 90%, can be counted on the loan application, which also helps.  Talking to a good loan officer is always a good idea.

How do you analyze Eugene Springfield duplexes as rental investments?  There is not one correct way to do it, but this is how I do it.  First, I look at the property itself, and factors I consider are: 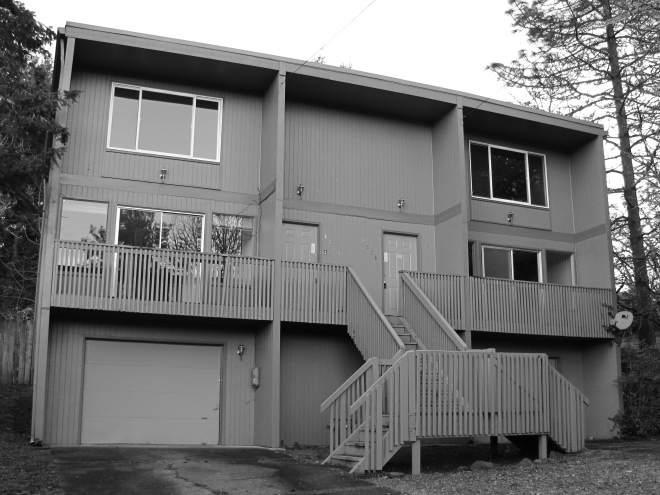 I showed this duplex last week.

Property Location:  This is the most important factor, because it’s the one thing you can’t change.  Chances are if you find an area icky and wouldn’t want to live in it, others may feel that way too, meaning it’s less desirable and rents will need to be lower to compensate for that.

In analyzing location, some of the things to consider are:

Condition of the Property:  Generally, you’re better off paying a little more for a higher quality property.  Better quality is easier to rent and tends to take less maintenance over the long haul.  As a practical matter, duplex rents around Eugene Springfield tend to cap out around $1,300 or so per month, so there’s a price limit above which duplexes start to make less sense.  Ultimately, if you are buying, getting a home inspection is a great idea, and I’m a Realtor, not a home inspector, so I don’t inspect homes.  However, I do pay close attention to the condition and quality of the duplex.  Things I pay specific attention to are:

For stem walls, I look for cracks that are large enough to put a pencil in or that have moved, which is also called faulting.  Given the amount of rain we get in Eugene Springfield, I look out for wet crawlspace areas, which aren’t desirable, but are fixable.

Cedar shakes were very popular in Eugene Springfield in the 1960s and 1970s, but is rare to see them used any more.  Generally, when I see a shake roof it’s at the end of its life and will need replaced sooner or later.  Metal roofs are long lasting, but not especially common.  They’re expensive and the one complaint I hear about them is that they’re noisy when it rains.  Concrete shingles are common on higher-end homes, but I don’t see them often on Eugene Springfield duplexes.  Copper and slate are very high-end, and are almost never seen on duplexes or other multifamily housing in Eugene Springfield.  Roofs leaks tend to occur around penetrations, such as vent pipes for HVAC , chimneys, and sky-lights.  The condition of penetrations and flashing is hard to see from the ground, so will most often be determined by the home inspection.

Duplexes built before 1978 may contain lead paint.  Watch out for discoloration due to mold or water leaks.  If either are present, they should be investigated and repaired.

Electrical:  Seeing updated wiring that includes 200 amp separate breaker panels, separate meters, GFCI and arc-fault interrupts is great, but it is rare to find them all unless it’s new construction.  Electrical systems are probably best analyzed by the home inspector.  There are certain brands of breaker panels that inspectors don’t like and usually suggest being replaced.  Other common problems are double taps in the panel, reverse polarity in some of the circuits, and improper grounding.  All are reparable.  Homes and duplexes need smoke and carbon monoxide detectors that are to code before the sale closes.

HVAC:  Heating, ventilation and air conditioning are important and expensive, so it’s good if they work.  Since the 1980s, heat pumps have been a common choice for heating in Lane County.  They utilize heat from the environment and usage costs are lower.  They do take a bit more maintenance, don’t last forever, and aren’t cheap to replace, so they’re not perfect.  For not a lot of money, they can also double as a central air conditioner, if there’s a reversing valve on the compressor, and condenser unit in the air handler.  With our moderate climate in Lane County, air conditioning is a luxury, not a necessity, in my opinion.  Tenants, of course, like air conditioning, but I’m not sure you get more monthly rent by having it.

Another popular choice in Eugene Springfield, for the last couple of decades, has been a gas furnace, either with our without an accessory air conditioner unit.  Natural gas is cheap and reliable, and the furnaces generally don’t require a lot of expensive maintenance.  Ceiling and baseboard heat are simple, reliable, but not as cheap to operate as a heat pump or gas furnace.  Still, they do work, and there’s some logic in the adage:  “if it ain’t broke, don’t fix it.”  Forced air wall heaters (sometimes referred to by a leading brand, Cadet) are fine.  They’re cheap and reliable.  There was previously a problem with certain makes and models in which they spat out hot metal and were a fire hazard, but most of those have been replaced or incinerated themselves.

Fireplaces are fairly popular because firewood used to be plentiful and cheap in Eugene Springfield.  They tend to be inefficient and there probably needs to be another heat source as well.  Inserts and wood stoves now need to be of the type with an EPA certification or be removed before a sale closes in Oregon.  One rare heating source is a sawdust or coal furnace, sometimes called an octopus.  I hadn’t seen one in years, but ran across one last month.  They were popular around the turn of the last century.  Any that remain probably could stand to be replaced.

Appliances:  Generally, if the appliances work, that’s about all you can hope for.  Appliances in duplexes in Eugene Springfield tend to be low-end.  Personally, I prefer step or two up from the bottom end.  Home inspectors usually do some simple tests to appliances to verify that they generally work.

Landscape, hardscape, & flatwork:  Simple, middle of the road landscaping and flatwork are best for duplexes in Eugene Springfield, at least in my opinion.  Tenants don’t tend to take the greatest care of either, and landlords often end up cleaning up and fixing both.  So, the thinking is that a 10 dollar arborvitae is more pleasant to replace than a $300 vine maple.  Likewise, replacing a $3 cement paver is less painful than a $25 sandstone rock from Montana. 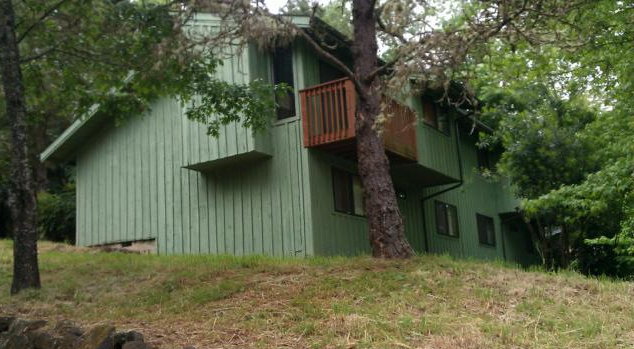 I was the buyer’s agent on this duplex.

The above are some of the factors that I use to look at the underlying asset, namely the structure, and its condition.   Analyzing the financial performance, or “the numbers” is also important.  There’s more than one way to go about this, and I tend to combine several ways to get an overall gestalt.  Some of the different ways to analyze Duplexes in Eugene Springfield follow: 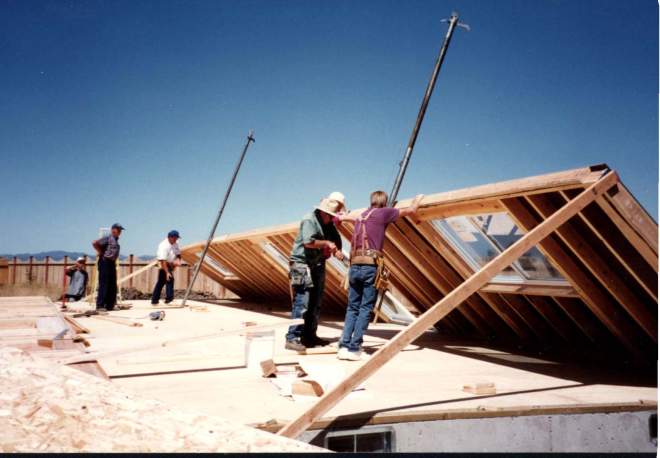 This is one way to learn about structures. I’m in the white in the rear. The wall jacks were held together with duct tape and bubble gum. Yikes.