The town of Marcola is the center of population and activity in the scenic Mohawk Valley in Lane County, Oregon.  Marcola and the surrounding area provide both a small town atmosphere and rural country living.  The area is mostly a bedroom community to Eugene and Springfield, being only a few minutes away by car.

The Mohawk Valley is east northeast of Springfield and generally follows Marcola Road.  The town of Marcola is about 10 miles NNE from the end of 42nd Street in Springfield.  Formerly a bustling economic center of the Mohawk Valley, it is now a peaceful hamlet of about 400 people.  Marcola isn’t incorporated, but you can still delineate between town and country.  This post is about both the town as well as the country properties to the north that have a Marcola mailing address.

Marcola feels like, and is, a small town.  Lots sizes are typical of older small towns at about 1/3 acre each.  Most are zoned RR1, meaning further lot subdivision isn’t likely under the current zoning.  There are a little under 150 properties, depending which you include as being in town, making for a population of say 300 to 400 people.  Median property value, according to the County, is under 100K, which is cheaper than average for Lane County.  Municipally supplied water is available from the Marcola Water District, but there is no public sewage system, so each house has its own septic tank.  Marcola has its own school district with two schools:  Marcola Elementary, and Mohawk Junior and Senior High.  Marcola is not incorporated, meaning there are no Marcola taxes per se.  It also has curbs, gutters and sidewalks in some areas, which is uncommon, if not unique for an unincorporated town in Lane County.  Marcola is near the Mohawk River, so some properties are within the floodplain.

Properties that have a Marcola address, but are outside of town are more numerous, numbering about 450, depending on how you count.  Average size is close to 5 acres and average values are about 180K, nearly double those in town.  Zoning is typical of country property, and commonly found zones are:  RR5, RR10, F2 and EFU.

It’s hard to imagine now, but the greater Marcola area, including the towns of Marcola, Wendling and Mabel, were once boom towns from about 1900 to 1950.  Timber reigned supreme and hundreds, if not thousands, lived and worked in the area.  When the big timber ran out, economic activity and populations dwindled.

In the glory days of the Marcola area, the following were there:  A rail depot and railroad with service to Eugene, multiple mills, hotels, an Oddfellows Lodge, a butcher & meat shop, a drug store, 2 service stations & a mechanic, a tailor shop, a barber shop, a theater for motion pictures and vaudeville shows, miniature golf courses, a WoW Hall, a pool hall, a candy store, a soda shop, a shoe repair shop, a photo studio, livery barn, and YMCA hall with a bowling alley.  There are a few business and the like now in Marcola, but it has fared better than Mabel and Wendling, which remain merely as spots on a map.  Mostly the area is a pretty and quiet place to live.

Marcola started with the first post office which was built in 1862.  Originally called Isabelle, it was renamed after the first Postmistress, Mary Cole, to Marcola.  Within 15 years, mills started being built nearby.  The completion of the railroad from Springfield to Wendling in about 1900 allowed logs and lumber to be easily transported, and the timber industry boomed.  The Fischer Mill in Marcola was a thriving concern for over 50 years, but ceased to be economically viable when the big timber was gone, closing in 1956.  Nearly all of the mill has been removed, but you can still see where it stood.  In fact, it was purchased, subdivided, and parts of it are for sale. 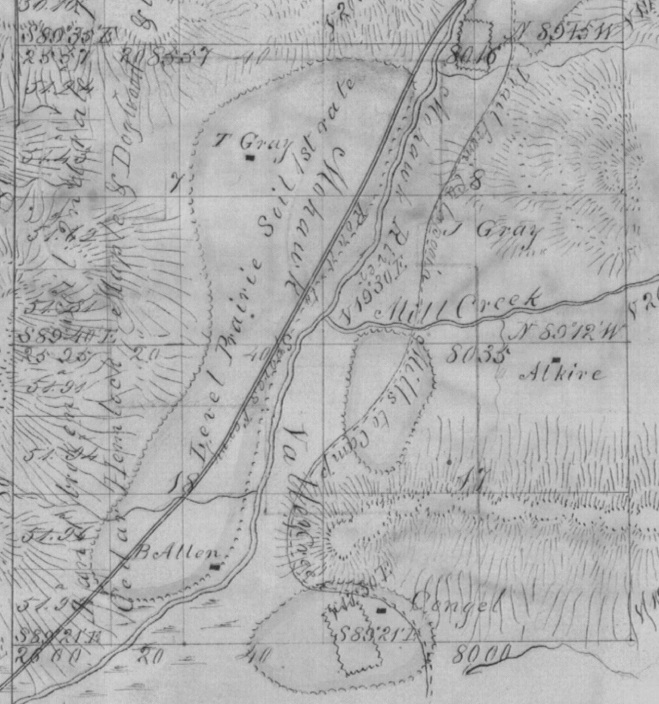 1855 survey of the Marcola area showing some of the location original homesteads. 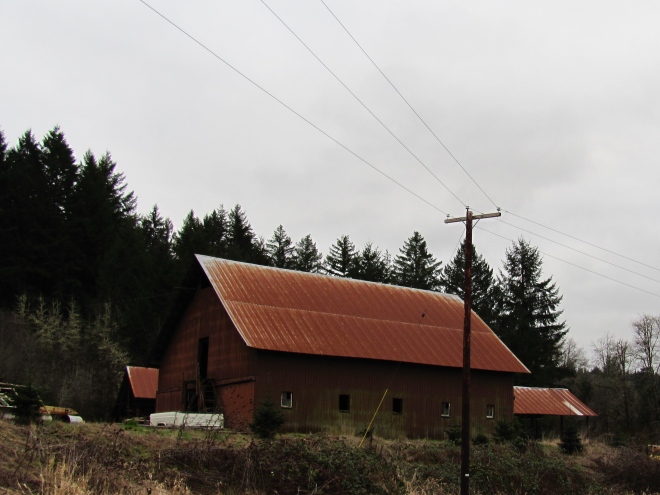 Where there are barns, there are often cows nearby.

One of the covered bridges in the area.

One of the few remaining remnants of the old Wendling mill complex.