So what’s up in 2013 with foreclosures in Eugene Springfield?  I get asked that question often.  The short answer is:  the supply of foreclosures, actively for sale, is low and foreclosures are still a good value.

When I last looked at foreclosure rates in 2010, they comprised 18% of Eugene Springfield sales.  In the last 30 days, they comprised only 8% of sales.  Short sales went up to 12% from 8%, 2012 vs. 2010, though.  Foreclosures plus short sales are sometimes said to be “distressed sales.”  The rate of distressed sales in Eugene Springfield is around 1 in 4 or 1 in 5 sales.

Every foreclosure is a tragedy for the former homeowner.  Staying in the house as long as possible is sometimes the goal, and understandable.  From a societal viewpoint, however, getting the foreclosures rapidly done with is thought to be good.  While the roots of the housing crisis go back to 1992, the Great Recession of 2008-2009 was lead by the tanking of the real estate market; its normalization must also occur, and we’re nearly there.  In fact, real estate prices in Eugene Springfield have trended up for the last few months. 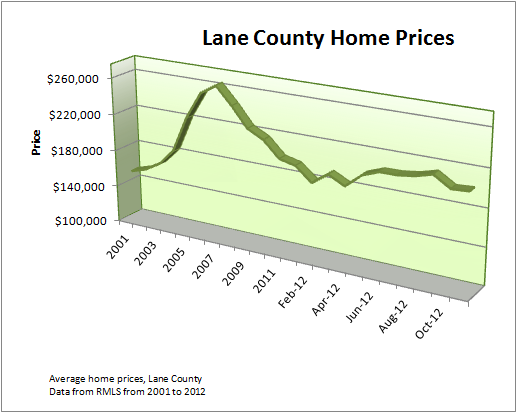 Shadow inventory is often discussed by foreclosure pundits.  Shadow inventory is real estate owned (REO) by banks, GSEs (Fannie Mae, Freddie Mac), the VA or HUD that isn’t actively for sale.  Some think intuitions manipulate the market through shadow inventory.  I think those people listen to too much talk radio, and there are legitimate reasons for shadow inventory, such as fixing up the house, clearing title issues, or insufficient resources to handle the large numbers of foreclosures.  Estimates of shadow inventory in the U.S. as a whole vary widely from perhaps 750K units to over 2 Million.

So, how does the inventory of foreclosures look in Eugene Springfield?  Foreclosures aren’t going away anytime soon.  I looked at the last 10 months stats from RMLS and there were about 282 closed sales, so we’re consuming say 28 per month.  There were 25 actively listed, but over 200 owned (8ish months’ supply) and over 200 in the process of judicial foreclosure (for say, 16 months’ supply).  So there are still plenty of foreclosures in Eugene Springfield that will be coming on the market in the upcoming year(s).

People often think that if they know about a vacant house that’s in the process of foreclosure that they or a realtor can contact the bank and get them a deal.  Sounds good, but doesn’t work that way.  When the bank or GSE is ready to sell, they typically list them with a Realtor who puts them on MLS.  Getting through to a bank on a house in the process of foreclosure is virtually impossible.

Another misconception is that banks just want the house off their books so a low ball offer is a good idea.  When I looked at the foreclosure stats, they sold in half the time as a non distressed listing and for over 99% of listing price.