We don’t often think about the Railroad in Eugene, unless there’s a problem–it’s just one of those things we take for granted.  We are on the main-line between Seattle and Los Angeles, and local manufacturers still ship and receive product by rail car, a very efficient transportation method.  (A train can move a ton of freight over 400 miles on 1 gallon of fuel, some three times more efficient than trucks).  And, shooting up to Portland or Seattle via Amtrack is popular.

Gone, at least for now, are the major switching operations in the Eugene railyard.  After Union Pacific bought Southern Pacific, many of the Eugene yard’s functions were consolidated to Roseville and elsewhere.  When I was growing up here, S.P.’s yard was a significant employer.  In the necessary drive towards efficiency, those jobs seem to be gone.  Interestingly, rail shipping rates in the U.S. are the cheapest in the world.

On a brighter note, the elimination of the Eugene switching yard has made the adjoining neighborhoods in Santa Clara, River Road and Bethel more desirable.   Train noise was a perceived problems when switching was occurring, but that’s been largely made a non-issue. 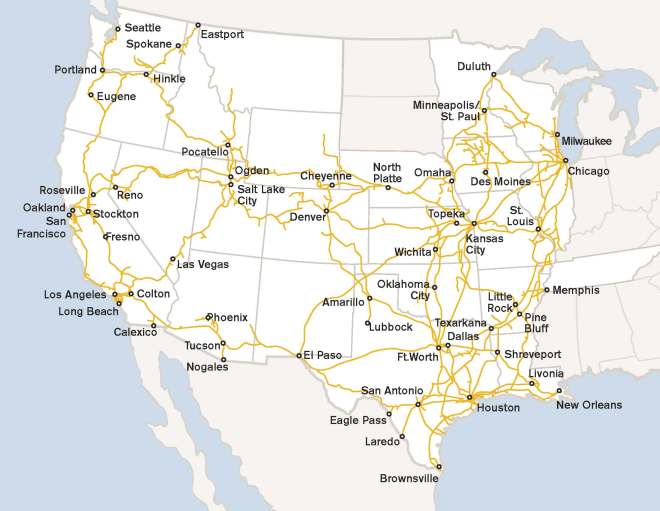 Eugene is connected to the U.S. by rail

One thought on “Eugene’s Railroad”